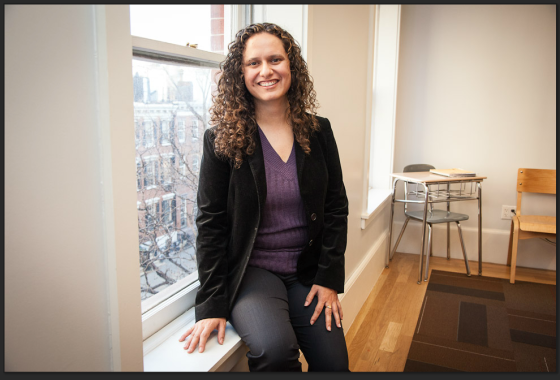 For nearly 20 years, Ileana Jiménez has been a leader in the field of feminist and social justice education. In an effort to inspire teachers to bring intersectional feminism to the K-12 classroom, she launched her blog, Feminist Teacher, in 2009. She is also the creator of the #HSfeminism and #K12feminism hashtags.

Her social media presence has lifted up the work of high school feminism teachers nationally and globally, bringing exciting visibility to the feminism-in-schools movement. A high school teacher in New York, Ileana teaches innovative high school courses on feminism and activism that have gained the attention of education and activist circles. She also teaches American literature with a social justice, intersectional lens; a course on Toni Morrison’s Beloved; a queer love stories class; and a memoir writing course.

Ileana is also an associate faculty member at Bard College’s Institute for Writing and Thinking, where she offers workshops to teachers and college instructors on writing-based inquiry.

A 2010-11 recipient of the Distinguished Fulbright Award in Teaching, her research in Mexico City focused on creating safe schools for Mexican LGBT youth. A strong believer in building community between teachers, in 2005, she founded the New York Independent Schools LGBT Educators Group, providing LGBTQ+ educators and their allies professional development and networking opportunities.

In recognition of her work teaching feminism and activism to high school students, the feminist speakers’ bureau Soapbox, Inc. awarded her with their first Social Innovation grant in 2014, with which she started the first Back to School Feminism symposium held at the New School in the fall of 2015. In recognition of her work on bringing feminism to schools, the National Organization for Women chapter in New York (NOW-NYC) awarded her the Susan B. Anthony Award in 2012. In 2011, Right Rides recognized her work in teaching youth about street and sexual harassment with their Distinguished Defender Award. In 2010, the Feminist Press named her one of their 40 Feminists Under 40. In 2009, she was named one of the 40 Women of Stonewall by the Stonewall Foundation as well as one of the 30 Women Making History by the Women’s Media Center.

Ileana travels nationally and globally to share her work on teaching #HSfeminism and the feminism-in-schools movement. She has also appeared on the Melissa Harris-Perry Show and has written for Curve Magazine, Feministing, Gender Across Borders, the Huffington Post, Ms. Magazine, On the Issues, the Smith Alumnae Quarterly, and the Women’s Media Center. A passionate advocate for the education of girls and women, Ileana is also a frequent speaker and mentor at Smith College and is on the Board of Visitors at the Miss Halls School.

In addition to speaking, Ileana has consulted at a variety of schools including Andover Phillips Academy, the Calhoun School, and Miss Halls School. She has also been a guest teacher in schools throughout India, including the Sanskriti School in Delhi; the Shri Shikshayatan School in Kolkata; and the Prerna Girls School in Lucknow.

Her essays can be found in One Teacher in Ten in the New Millennium (Beacon), SLUT: A Play and Guidebook for Combating Sexism and Sexual Violence (Feminist Press), The Feminist Utopia Project: Fifty-Seven Visions of a Wildly Better Future (Feminist Press), and Mistakes I Made at Work: 25 Influential Women Reflect on What They Got Out of Getting it Wrong (Plume). She received her B.A. in English Literature at Smith College, and an M.A. in English Literature at Middlebury College.

30 thoughts on “About Ileana Jiménez”