The following is cross-posted at Gender Across Borders and Equality 101 for their jointly hosted Feminism & Education series.

Each year, boys sign up for my high school course on feminism (photo, Ileana Jiménez)

In the past three years, I have taught a high school course on feminism titled Fierce and Fabulous: Feminist Writers, Artists, and Activists. Each year, girls and boys sign up for the class and each year, these young men are awakened not only to injustices regarding race, class, and gender in national and global contexts but also to injustices regarding how they have been socialized as boys.

With every example of women, girls, queer folks, and people of color facing discrimination, marginalization, and violence, boys awaken. White male boys begin to realize the male privilege they have enjoyed in a culture that valorizes powerful white men while boys of color gain language to describe their painful experiences of racism and classism. And each year, without fail, regardless of racial identity or socioeconomic class, the boys—both straight and gay—express their fear of being called a “fag.” 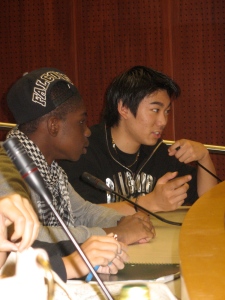 The boys in my feminism course participated in Columbia's "What is Feminist Politics Now?" conference in 2008 (photo, Ileana Jiménez)

Boys of all backgrounds begin to share that they have been robbed of learning how to express their masculinity in ways that are healthy, loving, and emotive. They begin to see, via feminism, that they have grown up in a culture that glamorizes what Don McPherson calls “toxic masculinity.” By the end of the course, they are ready to make some changes in how they navigate the world.

How does this happen? In the same way that the “personal is political” becomes an important catalyst for women reaching feminist consciousness, it is also critical for becoming a male ally.

For example, last fall, I invited Emily May, co-founder of the incredible anti-street harassment movement Hollaback!, to come speak to my class. During the course of conversation, May invited the students to share their experiences with street harassment. One by one, the girls in the class began to voice their horrifying yet brave stories on New York City’s streets and subways.

I’ll never forget one boy’s reaction to these stories. Ian was so moved by his peers’ experiences that he submitted a post to May’s Hollaback! blog. In it he wrote:

It was during the session with Hollaback! that my eyes truly opened. The girls in my class started speaking about their past experiences with street harassment and the stories just didn’t stop . . . I was shocked at the kinds of things that were happening to my classmates and I was more shocked as to how clueless I was during all of this . . . If these women have gone through traumatic experiences from which they had lasting memories, then most definitely women I know even more personally have gone through this type of harassment as well. It is scary to think that all of these things are going on without ever being called out. It’s scary to think that a man can completely get away with making a woman feel uncomfortable or unsafe on the street or subway.”

Ian was so moved by his female peers' street harassment stories, he blogged at Hollaback! to support them (photo, Ileana Jiménez)

Days after Ian wrote this blog post, his classmate Grace testified at a New York City Council hearing on street harassment. Ian’s support, along with that of the rest of Grace’s class, made her going up in front of an entire room sharing an intensely personal testimony that much more bearable. She had the backing of her classmates—both male and female—in the fight not only against street harassment but also against our larger culture of misogyny.

This same boy and another male classmate also led the male allies action spot at last fall’s SPARK Summit to launch a movement against the sexualization of girls and women in the media. As a result of the conference, my student Steven has talked about the importance of men being a part of the feminist movement, “Because men tend to be at the top of the ‘food chain,’ having their support is vital to getting the message heard. When no one in the oppressing group is willing to listen, nothing happens. But boys will listen for a little longer when I talk about what I’ve done with my feminism class. Another role for men in feminism is to show that the things feminism is fighting against affects everyone not just exclusively women . . . Men in the feminist movement give hope to some women who think that all men are against feminist thinking and don’t understand what oppression is.”

In the following video made by the Women’s Media Center, Steven shares more of his thoughts on gender justice for both women and men.

Steven’s vision is clear. Young men can and will connect to feminism if they see it as a tool for connecting to their peers—both male and female—to rid their lives of issues that are pertinent to youth such as racism, homophobia, and the sexualization of both men and women in the media.

In other words, boys will connect to feminism if they see it as a way to create partnerships with other boys and girls to make social change.

I’ve read many horror stories about women’s studies professors being heckled by male students who are just there to make a sexist scene. In the high school setting where I teach, I have never had that experience. Instead, the boys in my classes are curious about how feminism might connect to their lives. They want to know if feminism can help them become better versions of themselves in a world that tells them only one version is acceptable.

The boys in my feminism course have taught me that it is essential that we teach them about the various global feminisms so that we can finally reach gender, racial, and economic justice together as fully realized men and women. They have taught me that it is crucial that we bring a feminist lens to not only high school classrooms but middle and elementary schools as well.

My dream as a result? That whole generations of young women and men will never experience and/or perpetuate everything from street harassment to rape; frat boy misogyny to workplace discrimination; bullying of queer kids to the banning of LGBT soldiers in the military. All of these issues connect along lines of gender and sexuality, power and politics. If we teach gender justice to all young people, we might just make lasting institutional change.

My student Ian said it best, “Any man who finds himself ashamed of many of the things that women go through could be considered a feminist; I hope to gain from this class a better understanding of myself as a man.”