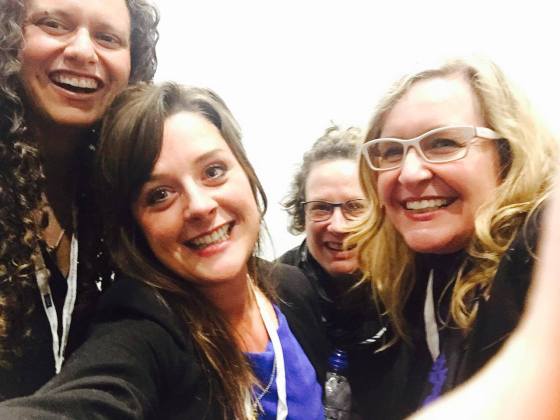 Leaders in the feminism-in-schools movement recently made history at the inaugural International Girls’ Studies Association (IGSA) conference when we were featured in the event’s opening plenary at the University of East Anglia in Norwich, UK from April 7-9. It was the first time that a global girls’ studies conference featured teachers and researchers sharing our work together on #HSfeminism, a hashtag I created in the last few years to bring visibility to our movement.

As we each presented our papers individually followed by a panel discussion, Professor Marnina Gonick of Mount Saint Vincent University in Canada; Professor Jessica Ringrose and doctoral researcher, Hanna Retallack, both of the Institute of Education, University College, London; and I made a bold statement that our intersectional feminist pedagogies and practices are transforming the landscape of classroom curricula, student activism, and professional development for educators.

We were particularly honored that our plenary took place at the same time as the Black Girl Movement Conference, where activists and scholars gathered at Columbia University for three days in New York City to focus on Black girls, cisgender, queer, and trans girls, in the United States. We feel strongly that as girls’, women’s, and gender studies scholars, we must all work together collectively to support girls of color in our activism and teaching.

Now that we are post-conference and closing out our school year, I brought together my colleagues via email to reflect on what the IGSA plenary meant for us.

Ileana Jiménez: I remain ecstatic that my #HSfeminism talk on “Black Girls Blog #BlackLivesMatter” received such a wonderful response at the conference; I was thrilled that delegates from such a wide range of regions around the world, from Australia to South Africa, responded so powerfully, especially to the video that I shared about my student Jessica, and the blog post she wrote about how #BlackGirlsMatter, in which she links the ways in which both the erasure and visibility of Black girls in our culture leads to violence against women and girls of color in the media, at school, and at the hands of police brutality.

As an educator of color, it was especially important to me to share Jessica’s work while the Black Girl Movement Conference in New York and our IGSA conference in Norwich was happening. The Girls’ Studies community was literally convening simultaneously in different parts of the world, and it was crucial to have Black girl voices represented during our plenary in the UK. Jessica’s blog post and video reminded us that indeed, Black girls are a part of both #BlackLivesMatter and #HSfeminism as activists, thinkers, and writers.

Marnina Gonick: Indeed, the IGSA conference was an amazing experience! It was very affirming to be around so many other researchers, scholars, and practitioners interested in girls and feminism. The conversations between sessions and at meals were incredibly thought-provoking and the presentations were inspiring.

My presentation looked at how socio-biology has crept into curriculum used in schools to address issues such as girl bullying and boys’ literacy. I outlined how problematic this is, given how socio-biology ties all social behavior and social relations to genes and evolutionary logics. It sets feminism back 50 years! I argued that although some of this material is laughable, feminists do need to take it seriously.

These are the curricular materials that teachers have easiest access to and socio-biological thinking is also seeping into popular culture. It appears in teen magazines, women’s magazines, and in newspaper stories. It fuels “common sense” thinking about gender difference. There is therefore a need to strongly counter this material with curriculum that is more reflective of the complexity of both social life and biological processes.

Hanna Retallack: As both a feminist teacher in a secondary school and a feminist PhD researcher, this conference felt like a wonderful forum in which to bring these two aspects together. It was an honor to be presenting with my supervisor, Jessica Ringrose, as well as to be alongside the inspirational feminist teacher, Ileana Jiménez, whose intersectional feminist work with students in New York is making waves across the globe; as well as Marnina Gonick, whose research into girlhood and femininities has interested me for some time. To feel a solidarity between teaching, scholarship, and activism, and to build upon the #HSfeminism movement, was very exciting for us all.

Jessica and I presented on the feminist action and research we have undertaken with girls in a London secondary school. Our talk was based upon a longer chapter, published this year and titled, ““Fuck your Body Image”: Teen Girls’ Twitter and Instagram Feminism in and around a school,”  in which we show how teenage girls are engaging with feminism within and then beyond their school, as well as how social media and notions of the “fourth wave” entangle with their feminist work. Having worked so closely with the group of girls we presented on, it was fantastic to showcase their feminist solidarity and activism to such a large audience.

As a teacher who aims to bring feminism into secondary schools, and a PhD researcher exploring the grassroots feminist consciousness raising groups emerging in UK schools, this couldn’t have been a more interesting panel on which to speak. I am already looking forward to more #HSfeminism collaborations in the future. 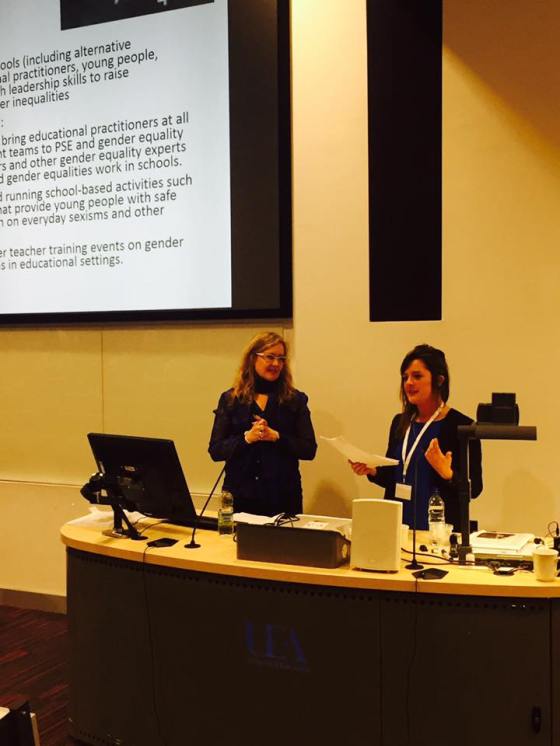 Jessica Ringrose and Hanna Retallack, both of the Institute of Education, University College, London, presenting on teen feminist activism in the UK (photo courtesy, Ileana Jiménez)

Jessica Ringrose: For me, this plenary was a wonderful way to showcase the collaborative impact activist-based research work is making as it explores feminism in UK secondary schools. Hanna and I reported back from a research project that joined up research in nine UK secondary schools where academic researchers worked with teachers to set up or study feminist clubs, groups, or societies. This project is now a part of GELS or the Gender Equality Leadership in Schools Network, hosted by the international Gender and Education Association, which works to reduce gender inequality in education.

In our presentation, we talked about the experiences of the girls in just one of these groups at a London theatre school. We explored the complex struggles the girls had to occupy ‘feminist space’ in their school and how they used online communicative processes to disrupt ideas about ideal (thin, white) ‘sexy’ body image amongst one another. Most importantly, the way the girls’ communicated online was no case of dismissable ‘slacktivism,’ rather they took their struggle out onto the streets to rally at a London protest against the Beach Body Ready Campaign!

These girls show us the creative power of online feminist organizing and community through platforms like Twitter. In the UK, the next step is to inform a current government inquiry on #sexualharassment in schools. We are using our findings to illustrate that supporting feminism-in-schools is the first, critical line of defense in fighting against gender inequality, sexism, sexual violence, and sexualized harassment including those directed at LGBTQ young people.

Starting at school will enable a wider social change toward gender equality for all.