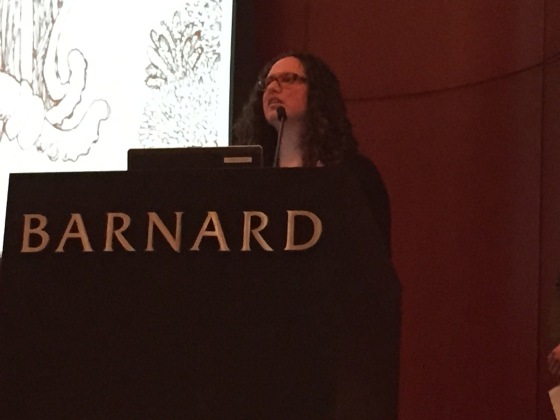 I had the honor of being a part of the opening plenary at this year’s Scholar & Feminist Conference hosted by the Barnard Center for Research on Women (photo credit: Sarah Rodriguez).

I’m excited to announce my speaking schedule for the remainder of the winter, spring, and early summer of 2015 (jump to the end for a full list). Last year’s line-up was particularly invigorating, with talks and panels everywhere from schools in India to universities in the UK. I was especially honored to be the keynote at various conferences last year, including Bowling Green State University’s Generation Justice Conference in Ohio and the National Sex Education Conference in New Jersey.

This year started out just as promising and just as national and global in reach. January included a Skype session with teachers in Iceland that was organized byAuður Magndís Auðardóttir, who works on initiatives on education and youth in Reykjavik. Auðardóttir said that my session on teaching feminism and intersectionality in K-12 classrooms “was inventful in finding ways to [make] the subject both personal and professional – which is so very important. Even [though] we were working over Skype, she managed to get everyone involved in sharing their thoughts and reflecting on their own situation in regards to feminism and equality. Her take on intersectionality was also very helpful for educators.” END_OF_DOCUMENT_TOKEN_TO_BE_REPLACED

Earlier this school year, the Barnard Center for Research on Women celebrated its fortieth anniversary by holding a conference titled Activism and the Academy: Celebrating 40 Years of Scholarship and Activism. I sat on a panel titled Writing, New Media, and Feminist Activism along with other inspiring activists such as Mandy Van Deven of Girls for Gender Equity; Veronica Pinto of Hollaback!; and Susanna Horng of Girls Write Now.

The inimitable Courtney Martin, former Feministing editor and author of such books as Do It Anyway: The New Generation of Activists, moderated the panel. Courtney framed our conversation with three compelling questions:

It was an honor to to be a part of this exciting conversation with inspiring women who are at the forefront of working with young people at the intersections of gender and equity, writing and feminism, activism and advocacy.

Even more exciting was bringing the high school juniors and seniors in my feminism class to the conference; they all sat in the front row of Barnard’s Diana Center eagerly scribbling notes as they listened to the panel. Each of them wrote excellent blog posts on their feminist class blog, F to the Third Power, about their experience at the conference.

I think you will be left inspired by my students’ posts, as they ponder what feminism means to them, including Dinayuri, who wrote: “Feminism is not broken. It does not need to be repaired. It isn’t tainted so much so that the grounds from which it was built has to be destroyed and created all over again. But rather there is a need to expand feminism to include as well as recognize and fight for more diversity. Feminists can no longer be ignorant to other factors of oppression that come into play and which thwart one from being fully free of all discrimination.”

A video of the panel is now available: