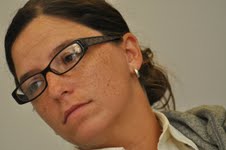 No one is fighting this battle on the ground with more passion and energy than Shannon Cuttle. Cuttle, founder and director of the Safe Schools Action Network (SSAN), knows from personal experience as both a former elementary school teacher and administrator how important it is for all schools to be free of bullying against LGBT and gender-nonconforming students, families, and educators. Cuttle’s activist heart and policy wonk mind make her a fierce advocate for change and an inspiration to all educators who want to make a difference one day at a time.

What is the 100th Day of School and how does the movement for safe schools merge with this day?

The 100th day of school takes place each year and is recognized across classrooms and schools. The Safe Schools Action Network is marking 100 days of school as 100 days of bullying. Our day encourages schools to have discussions about bullying and harassment and to question whether schools are creating inclusive safe spaces for educators and students.

We’ve asked students to write to principals in a “Dear Principal” campaign, and we’ve asked parents to do the same by speaking to school leaders. On a national level, we’ve asked community members to speak out and speak up by writing letters and op/eds to raise urgency as we reach the end of the 2010-11 school year.

By the end of the day, the goal is to open up dialogue on a local and national level and bring back awareness to bullying. Change will not happen without support and action. Merging both the milestone of 100 days of school with 100 days of bullying will bring bullying back into the spotlight.

What are some of the pending legislative bills on bullying and harassment that educators should be aware of?

Several states are looking at creating bills on this issue. Virginia has introduced a bill, as did Arizona, Minnesota, and Missouri. California is about to introduce a third bill; they had a comprehensive bill in 2003, but they’ve been lagged by oversight. California’s third bill is meant to close the loophole on another bill to demand that anti-bullying be a part of the curriculum—even though it’s already mandated to be in the curriculum in terms of workshops for teachers—but the state doesn’t have the oversight to make it happen. North Dakota and Arkansas are having a hearing in early February to receive feedback from their communities. In Minnesota, the capital passed anti-bullying safe school ordinances for local communities.

Federal legislation that are tentatively going to be re-introduced this year include the Student Non-Discrimination Act and the Safe Schools Improvement Act.  Senator Al Franken’s office is currently looking at re-designing the bill to make sure they are more inclusive. More information has come forward since the introduction of the two bills last year on bullying and on how to support students.

We need to make sure both talk about safe schools for LGBT and gender non-conforming students and educators. Common terms that have been used in some state bullying bills are “no bullying,” but the language needs to be enumerated and comprehensive about what that “no bullying” means so that you don’t wind up with school administrators having an open interpretation of language that won’t protect all students and families. When you do have a case come up, some administrators have made their own determination of what is considered bullying and harassment, causing complications for students and families.

Being a teacher can be challenging, because depending on the support you have with school administrators and with co-workers, if you are an out educator it can be either a positive or challenging experience, and I’ve had both. I’ve had situations where school administrators and peers have ostracized me and have been critical. In these situations, the schools did not look out for the best interest of students or educators while others have been supportive.

Very early on in my career, I was at a private school, and we had a same-sex family of two dads. The school’s PTA voted on a policy that would only allow one dad at a time to pick up and drop off their daughter at school. They believed it would confuse the children and other families if they saw two dads pick up their daughter. This PTA board also decided to build an additional bathroom for the girl because they thought that she would bring “gay germs” and HIV/AIDS to the school.

I attended that PTA meeting when those decisions were made and then went to the headmaster and told him what happened. I was told that because I was a new, young, and overly ambitious kindergarten teacher, that I should just observe as a teacher liaison and not worry about it. Well, I worried about it!

At the next meeting, I brought the board members correct information on HIV/AIDS and asked about providing better solutions for the two dads.

I then talked to other educators, trying to find ways to open up the dialogue and make the atmosphere more diverse and inclusive, in order to break down stereotypes for this family.

The dads were very professional and gracious and they never once for a minute complained publicly. Each day when one of the dads came by to drop off or pick up, they had brave faces on. Even so you could see the wear and tear on their faces, but they would never tell you. They still had a great relationship with the school and still remained big advocates of the institution.

Over time, the school welcomed both dads and the ban was removed. They were allowed to come to school events with their daughter and they could both drop off and pick up their daughter at the same time. They broke ground because they were the first same-sex family in the school.

You left teaching in order to devote your time to the Safe Schools Action Network. When did you found SSAN and what is its mission?

I founded SSAN in 2009. The name itself came from meetings I used to have for staff members on creating safe spaces in schools. The staff would call them “safe school” meetings, so that’s where the name came from. From those meetings, there was a smaller group of committed supporters that grew afterwards, and that’s how SSAN started.

The Safe Schools Action Network is a national grassroots organization that seeks to empower communities, schools, educators, and students to create safe schools by teaching self-advocacy. We give them tools to create safe spaces by first starting with dialogue. We support students in speaking to their teachers and principals and we support parents in their effort to feel comfortable talking to their children, teachers, and administrators. We empower them to speak out and speak up.  Unless all students, educators, and families are in a safe space, then we are not providing high quality education and equal access.

Our local chapters provide support, resources, toolkits, and training. We work in solidarity with GLSEN (Gay, Lesbian, Straight Educators Network), the GSA Network (Gay Straight Alliance Network), PFLAG (Parents and Friends of Lesbians and Gays), the Make it Better Project, and others to help make sure students and educators have support with using not only our resources but also on building their own local resources. We give teachers and students the resources for empowerment.

I receive letters from all over the country from educators and students who say that they didn’t know these resources existed. Teachers need the resources to create safe schools and to share them with colleagues. It’s all about building community and working in collaboration and solidarity.

Were you always an activist?

The first time I ever organized something was when I organized a walkout on my elementary school playground to support an elderly custodian, who was a favorite. He was like a grandpa figure and would fix our toys and pal around with us. He gave kids who didn’t have money $1.50 for school lunch. He was a beloved part of the school family.

We had a school principal who was new at the time. She decided to take away the custodian’s office in the boiler room, limited his direct interaction with kids, etc. I was in fifth grade, and I talked to several classmates as well as kids in adjoining classrooms. We made protest signs and then did a walkout to the blacktop without putting on our jackets on a chilly fall day. We wanted our beloved custodian to get his office back in his boiler room so that we could find him.

The principal invited me to have a meeting with her in her office. I gave her my demand. We talked for an hour; she agreed to put his desk back in the boiler room and my “punishment” was that I had to stay in from recess and report to the boiler room and help the custodian, which involved him telling me stories about how he grew up or cleaning up the music room.

The principal continued the dialogue with me after all this happened. She would ask me what the kids wanted in the school. She wound up being a mentor to me; she used the situation as a teachable moment.

Angela Davis once said, “Radical simply means grasping things at the root.” What are the radical approaches that schools need to take in order to “grasp” what anti-gay bullying and harassment really means so that we can get at the “root” of these issues?

One of the most radical things we can do is speak out and speak up. Our voices are something we own and when we can use them to move mountains and help communities. We need to have spaces where educators and parents can speak out and speak up such as at town hall meetings to discuss what makes our school safe. We need to hold safe spaces for those honest discussions and build on that.

One of the most frustrating parts of this work is how often teachers are villainized for not responding to bullying and harassment, when so many of us are doing the work of creating safe schools. How can we begin to change the media narrative that teachers aren’t doing anything, when in fact, we are?

In the media, immediately we hear it’s the teacher’s fault when something happens such as bullying. It’s always the first line of defense to throw the teacher under the bus, then the administration, etc. People usually don’t realize that the teacher probably had an increased student load, they probably lost their teacher aide, and they also probably haven’t had the training. The public usually doesn’t see what happens inside schools and doesn’t see the everyday life of a teacher.

I know more teachers who are so passionate about their job and who go the extra mile every single day to get to know their kids and families, than I do teachers who shouldn’t be teaching. We talk too much in the media about higher standards for teachers and evaluation methods, but we don’t talk about the good teachers and give good examples. We need to highlight the champions of education as much as the poor performers.

We need to put teachers in a positive light as well as support each other, and talk about what a great job we are all doing. We need to hold accountable any school that throws the teacher under the bus, and instead ask: how is the community supporting teachers and the school in creating safe schools?

Teachers who are fighting the good fight need to not be afraid to speak out and speak up. Classrooms are not islands; all together they make up a community. There needs to be a revolution with teachers to make them more empowered so that they are valued members in the professional community.