Inspiring words by Shivanee Sen, a young teacher I recently met at the Tagore International School in Delhi, where Sen is mentoring the first student-led campaign in India to address LGBTQI (lesbian, gay, bisexual, transgender, queer, intersex) issues. In the U.S., Sen’s student group would be called a GSA (Gay Straight Alliance), but in India, it’s more like a revolution.

In just a little under six months, Sen has mobilized an energetic group of over 50 students to address issues of gender and sexuality in education and politics. What they have done in a short amount of time is more than what most established GSA’s in the U.S. do in years.

Called Breaking Barriers, Sen started her groundbreaking group during a conversation with her high school students about gender. Her initial goal was to inspire students to care about intersex individuals as well as the hijras, a community of transgender women, who are marginalized both socially and economically. What started as a discussion topic has turned into a national campaign that has gained the attention of the Indian media across the country.

What’s utterly remarkable is that Sen’s students have taken on work that is usually done by experienced activists. For example, last summer, all of her students trained with one of the leading feminist human rights groups in India, CREA, dedicating six weeks worth of weekends to learn about queer issues and activism. Each of these intense workshops lasted about three to four hours each and taught students the various nuances of Kinsey sexology, current LGBT terminology, and misconceptions about the queer community.

“Over the course of six weeks, not a single student missed a workshop,” Sen said.

After completing their training, students then led LGBTQI inclusion and awareness workshops for their entire high school faculty of teachers and fellow students at Tagore. The trainings have gone successfully, especially in terms of breaking down misconceptions. As part of their education and awareness work, the students hope to deliver these workshops in other schools across India.

A solidly middle class community, Tagore parents are mostly in the business sector. When students met with me to discuss their activist work, they shared a mix of reactions when I asked them how their own parents would feel if one of them were to come out.

“My parents would accept me,” one student said.

“My parents would wonder if [LGBTQI people] would have a bad influence,” another said.

The trainings that the students have created for their teachers and peers include an extensive PowerPoint with definitions, graphs, and resources. Students have also participated in a powerful video made by CREA; participated in the Delhi Pride March last November; and protested against the recent restoring of the Indian penal code 377, which criminalizes homosexuality.

The group also has an active Facebook page that is regularly updated by the students with encouraging postings about queer activism both in India and abroad. They even have their own student media team that is creating a feature documentary about their work, a sneak peak of which can be seen here. A possible student radio show is also in the works.

As a result of their work, the Global Educational and Leadership Foundation crowned the Breaking Barriers team with their National Youth Leaders title after an intensive search for high school students doing the best grassroots social work in India.

Doing grassroots work is not usual for middle class Indian students who, like many American middle class students, are sometimes very much removed from not just radical organizing but activist work in general.

Indeed, part of what motivated Sen to start this group was to move middle class Indian students away from “resume-building” and instead towards being committed to social justice from a genuine place of compassion and care.

Over a cup of chai in Delhi, Sen confessed, “Americans do more service than Indians do, and India needs its citizens to do a lot more service.” A Berkeley graduate with a psychology degree, Sen has her sights on doing a masters program at various education schools in the U.S.

“Along every metric, LGBTQI people suffer more in terms of harassment, assault, and suicide. Of course, I wanted my students to learn about these issues, especially since in India, no one talks about it,” she added. 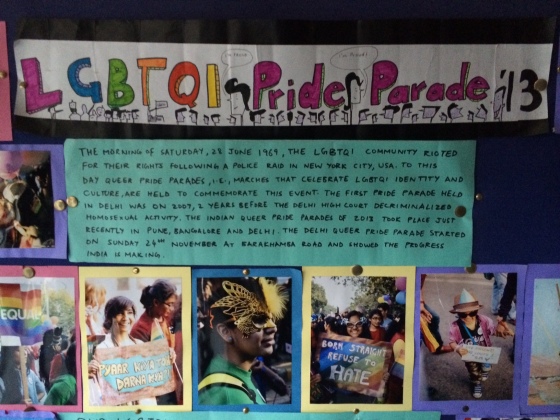 Breaking Barriers has a prominent bulletin board located at the front of the school featuring their LGBTQI activism (photo credit: Ileana Jiménez).

During my own two-hour conversation with the students, it was my goal to learn directly from them what they were getting out of the experience of being a part of Breaking Barriers. Why did they join? What keeps them committed? I wanted to know.

Students shared that they felt most proud of changing the school climate in relation to talking about queer issues, albeit slowly.

“Our friends all know that if they are about to say something homophobic, that we will pounce on them,” one student said.

Even with a changing climate at this particular school, coming out in India is still a challenge for young people.

“There are no out students at the school, at least not publicly,” Sen said. “Our campaign has brought about a change in terms of people not wanting to say ‘that’s gay’ anymore. The campaign has made everyone more PC [politically correct].”

Being more PC is a start, but it’s not enough, and Tagore students know that. Understanding the root causes of homophobia and transphobia is the next step. Creating safe and inclusive schools with education and awareness workshops consistently and over the course of time is part of that work as well.

Creating a leadership path for the next group of Tagore students to lead workshops for upcoming classes is also essential. Indeed, in my time with them, I shared with students that their work needs to be passed on to those who are younger than they are.

“One day, you will graduate, and the next group of students will need to learn what you have all learned to continue the work you have started. In schools, this work is never-ending,” I said.

Even the principal, Madhulika Sen, is committed to continuing this project. Completely fearless in her approach to LGBTQI inclusion in schools, Sen told me that she never even thought about the repercussions from the parent body.

“We didn’t even think about the parents’ reactions. We just thought this was the right thing to do,” she said.

While it helps that Madhulika is Shivanee’s mother and that the school was founded in 1972 by Shivanee’s grandmother, Dr. Hari Sen, taking on queer issues in a school steeped in family history hardly seems like the usual route for a traditional school, especially in India. 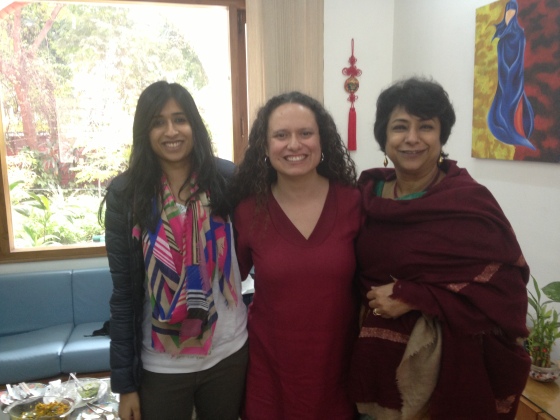 A family affair. Shivanee Sen and her mother Madhulika Sen, who is the principal of Tagore, are committed to addressing LGBTQI issues in schools (photo courtesy: Shivanee Sen).

I think that’s why I’m particularly rooting for Tagore. The family piece makes me cheer them on all the more. It’s not just that a passionate group of students are leading workshops and marching in the streets. It’s also that it’s a family affair that’s committed to social justice of all kinds, regardless of what some parents might think. It’s the right thing to do, as Madhulika, the principal, says.

If a school like Tagore—which is K-12 and in the heart of Delhi—can address these issues, then schools around the world can do this work too. As the younger Sen, Shivanee, says, it’s all about building a culture that questions the status quo.